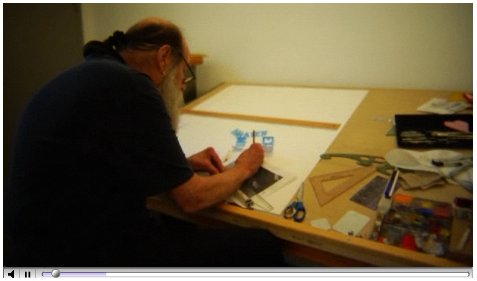 Hillman just walked over to my desk, pointing me to his latest movie, featuring Lawrence Weiner. How exciting to, yet again, have another exclusive HC sneak premiere! YAY!

Debbie Millman called Hillman to film this one – she originally wanted to have Lawrence on her “Design Matters” podcast, but he wasn’t so interested in a phone interview. Since she had the opportunity to show up at Weiner’s studio she asked Hillman along and it became a joint – Design Matters/Artist Series – production.

Fabulous! I think I’d like to see more collaboration happening between Debbie and Hillman!