Murals for The Library Initiative 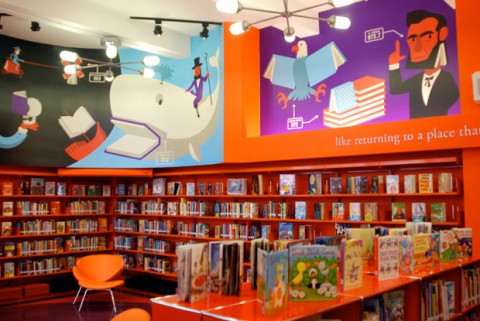 Christoph Niemann’s murals at P.S. 69 in Clason Point, the Bronx. Concealed in every image are one or more books.

Nearly nine years ago, Pentagram was asked to contribute to a visionary effort by the wonderful (and design-conscious) Robin Hood Foundation: an initiative to build new school libraries in elementary schools throughout the five boroughs of New York City. A range of talented architects would design the libraries; private companies would donate books and funds; and Pentagram would provide the graphic design, including signage, wayfinding, and a masterbrand that would tie all the sites together.

Along the way, they discovered something interesting. The libraries are usually located in older buildings with high ceilings, but the shelves in the libraries can’t be built higher than kids can reach. This means there is a space between the top shelf and the ceiling, an up-to-six-foot band around the room just begging for something special. That something turned out to be murals. And the results can now be seen in schools all over New York City, including five brand new ones in the Bronx which feature murals by Rafael Esquer, Maira Kalman, Christoph Niemann, Stefan Sagmeister and Yuko Shimizu, and Charles Wilkin.

Post over at Pentagram: Murals for The Library Initiative. Article over at the NYTimes.com.