What’s Next for Design? Panel Discussion at MAD 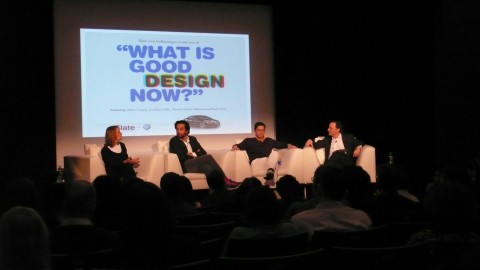 Our little Ella came down with a fever mid-afternoon and I rushed home thinking I wouldn’t be able to make it to tonight’s design panel discussion at the New York Museum of Arts & Design. But she rallied and thanks to the power of Motrin, and wonderful G, I was able to attend. The esteemed panel included Jonathan Adler (Furniture Designer), Paula Scher (Designer, Pentagram) and Ahmad Sardar-Afkhami (Architect) (I asked him and he doesn’t have a site up at this point, but should so shortly). The invitation to the event stated that the panel discussion would examine how industries will reinvent themselves in this new era; What’s Next for Design?

Adam Gopnik, a staff Writer for the New Yorker was the moderator for the panel, which by the way was sponsored by VW. For those of you who read my blog regularly, you might have come across a post or two where I express my frustration with panels. Well, the unthinkable has happened, I truly enjoyed this panel tonight, and it was very much thanks to Adam Gopnik. He did a *fantastic* job in steering the conversation, giving it an interesting flow. Hat tip to Adam.

I simply want to list a few notes I took of thougths that I thought were interesting:

Adam made a point that ‘design’ is the most present and most invisible element in our life.

– Jonathan Adler calls his own philosophy happy-chic. He believes his sensibility can be traced directly to the way he grew up, the design he was surrounded with. First design related memory of his childhood; their neighbor had a ceramic leopard that left a huge impression. He learned that things can be memorable. By the time he was four he believes it was all instilled in him thanks to his parents and Mrs. Goldsteen, his neighbor. (On a side note: I had never seen Jonathan Adler speak and I was impressed in how incredibly funny and eloquent he was. Definitely my panelist highlight!)

– Paula Scher stated that sylistically she has no personal ethic, no one thing is right.

– “The magic of applied art is that we have a problem to solve, opposed to the fine artist. We respond to and solve design challenges.” – Jonathan Adler

One of the funniest moments in the evening was when Jonathan Adler spoke about one of his latest projects, the redesign of Barbie’s 50th Anniversary House: “I loved designing for a 100% plastic client! I did this over the top, meta, glitter, frosting, cupcakes house. An amazing opportunity to step back from real life, with real people, to have a plastic client with no husband to weigh in. (Ken is in the picture but peripherally, Ken is not moving in.)”

– “A terrible collaboration is when there is no collaboration. When you work with someone who has no respect for what you do, what you’ve done and your skills. The client from hell is not that client, because you fire him, the client from hell is the one that is actually in the collaborative process and once you agreed on something they call you and they start making changes and slowly but surely more and more modifications kill the design.” Paula Scher

“Bad design is often design that is done by committee or focus groups, it is design that is overly considered, watered down, timid. The more the design comes from my gut, the more focus groups would hate it, but because I have my own stores, I don’t have to ask anyone for permission. I can get direclty to the end user.” Jonathan Adler

One of Jonathan Adler’s three muses is Alexander Girard (midcentury graphic designer), as he thinks that Alexander’s work really communicates the pleasure he got out of design.

– “I am always looking for the thing I don’t know, not the thing I’ve already seen. The beginner’s mind is what I am thriving for. I’ve always done the best design when I didn’t know what I was doing.” Paula Scher

Question from the audience: Design is getting more coverage than it used to. Is that true? “It’s definitely true”, says Paula. “Almost every major magazine now has a design column and a design writer. Why is that? Companies like Apple or Target have made design incredibly l apparent, people are starting to recognize that things are designed. They become savvy and they realize they’re being manipulated. The consumer is starting to have different expectations to environments.”

Overall an interesting evening. Thanks to Slate for organizing, MAD for hosting and VW for sponsoring.