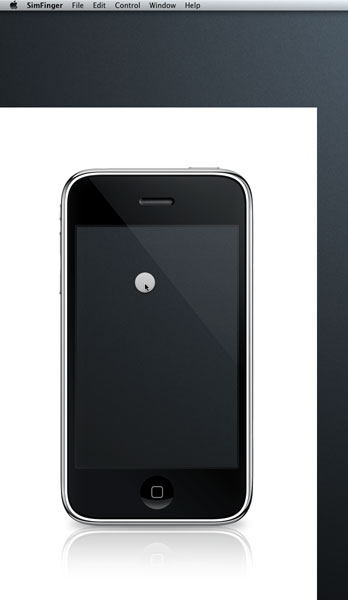 I was googling away trying to find the best solution on how to create a demo video of an iPhone App. Until it occured to me, that my new desk neighbor, iPhone Ninja Larry Legend might know the answer. I asked and BOOM, there it was:

Use SimFinger. SimFinger itself is composed of two parts. One is a fake “frame” that sits ontop of the simulator. It adds some shine and gives it an iPhone 3G-look. Clicking anywhere on it will just click-through to whatever is below. The other part is a little nub that follows around your cursor. It “indents” when you press down with your mouse, indicating what would be a “touch” on the phone.

The idea is to position iPhone Simulator below this facade and do a screencapture of just this area. You’ll need a good screencapture tool. (iShowYou?) It has to have the option to capture just some sub-region of your screen, and also the option to not capture the mouse pointer (which you should use, unless you want to ruin the illusion).

With SimFinger running, go to the Control menu and select “Set Fake Carrier Text…”. Enter the text “ATT” then, relaunch the iPhone Simulator. You’ll notice the (dead-givaway) “Carrier” is replaced by “ATT”. Do the same for the “Fake Time Text”. Apple typically uses “9:42 AM”, I do the same for my screencasts.

The last step to the puzzle is to give your app some friends. SimFinger comes bundled with “Fake Apps” that mimic Apple’s built-in apps. In SimFinger, goto Control – Install Fake Apps…, then restart the iPhone Simulator one more time. You’ll see a ton of stuff was installed, but it’s probably in the wrong order. Go ahead and re-order the icons to match the screenshot below (the “official” order).