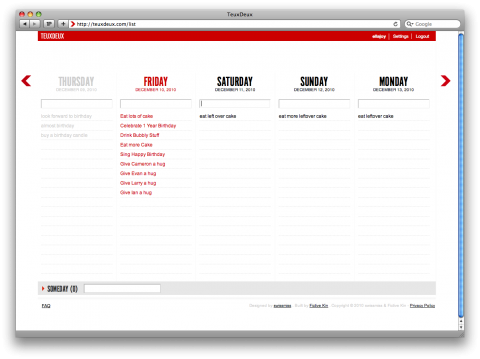 A year ago today, my studiomates Cameron, Evan and I launched a To-Do App called TeuxDeux. Little did we know that our fun side project would touch so many people’s lives and increase the global productivity index by 34%. (joking)

Within hours of launching and announcing it on swissmiss, Fast Company wrote a blog post about it calling it “The Web’s most beautiful To-Do List“. Yes, we were speechless.

We have been blown away by the response to our simple, calendar based app. It obviously struck a nerve with people that like to get things done. If you love making lists, you mostly like will like TeuxDeux.

The minute we launched everyone started asking for an iPhone app. We listened. Cameron and I, savvy when it comes to web sites and web apps, had never done an iPhone app. As you can imagine, the learning curve was steep, but the fun factor and overall excitement of getting into a new medium was high! Entering this new territory made me think back to the days when I just started out in web design. A few times, before a call with our developer, I looked over to Cameron and asked: “If I ask for this feature, will I come across like a client that asks for a Flash Site with a ‘Skip Intro’ page?”

The iPhone app development took us longer than we anticipated but in august of 2010 we finally launched the TeuxDeux App:

We built TeuxDeux for ourselves. We *never* anticipated this getting so big and having such a profound impact on so many people’s lives.

We now have a huge global fanbase that on a daily basis sends us love tweets:

A big giant thank you to all of our loyal users! If you’re wondering What deux yeux have teux deux teuxday? Have a piece of cake for us!