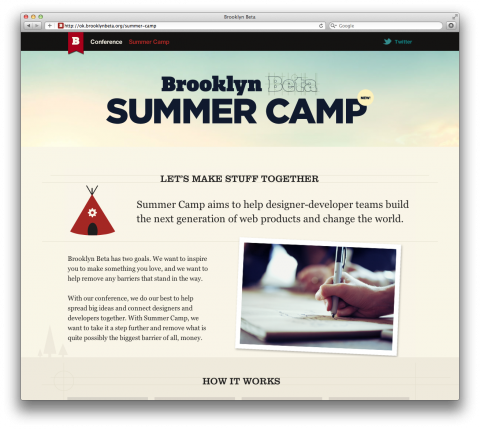 It’s a pretty special day for my studiomates Chris and Cameron, forces behind Brooklyn Beta, the friendliest conference I have every attended. With today’s launch of Summer Camp they are moving beyond just being a conference.

Chris and Cameron were inspired by what Y Combinator has done for developers and hope to show some of the same love for designers. Not at the expense of developers, though. Their ideal team has both a designer and a developer working together.

With Summer Camp they aim to help “designer-developer teams” build the next generation of web products and change the world.

With the Brooklyn Beta conference, Chris and Cameron try to help spread big ideas and connect designers and developers together. With Summer Camp, they want to take it a step further and remove what is quite possibly the biggest barrier of all, money.

It’s a 12-week program in the summer leading up to the conference. They invest $25,000 in your company for a 6% stake, and give you a lot more help along the way.

Summer Camp is part of the Brooklyn Beta nonprofit, so any gains made in this year’s investments will go right back into the community and hopefully fund the next round of Summer Campers.

And lucky me, I have the honor to be one of the Summer Camp advisors. At the ready to offer advice and experience. Check out the impressive advisor list:

Here’s what Chris and Cameron are hoping Summer Camp will fund:

“We are hoping to back big ideas looking to make a real impact. Don’t just make something for your peers. Build something that fixes the insanity of modern education. Or helps people weather the upcoming financial crises and rise in unemployment. Or improves the health of people around the world. Or brings neighbors closer together. Or helps people run small businesses. Or strengthens the bonds of families. Or puts existing abusive, mammoth institutions out of business (pretty please).”

Chris and Cameron deserve an internet hug for pulling this off.