My full name is Tina Roth Eisenberg. I started swissmiss in March of 2005 as my personal visual archive. Little did I know that it would eventually grow into a popular design journal with an average of 1 million unique visitors a month.

I grew up in Speicher (AR), Switzerland, influenced by renowned Swiss design and a lot of fresh mountain air. In 1999, after completing my design studies in Geneva and Munich, I crossed the Atlantic and began designing in New York.

I founded and run a global monthly lecture series called CreativeMornings, I co-created a to-do app called TeuxDeux, I am the founder of Tattly, a designy temporary tattoo shop and I founded and run a co-working space called FRIENDS.

Because of the popularity of my blog, I am often referred to as swissmiss. I like that.

Thank you for reading!

My dear friend and TeuxDeux co-parent Cameron interviewed me and you can feel the mutual love and respect we have for each other oozing out in this deeply personal conversation. 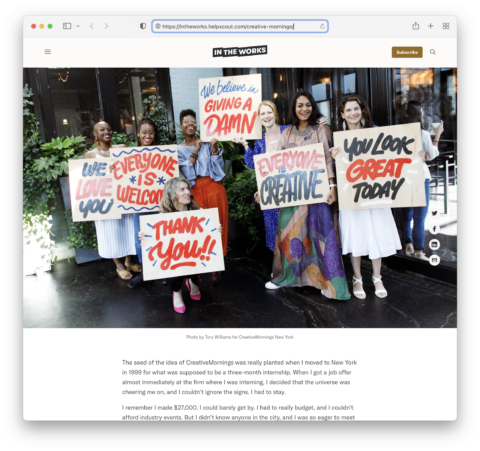 I wish all Podcasts would feel this energizing. I love David of StreetWisdom.

Thank you Re:Considering for this fun conversation.

Thank you SY Partners for letting me reflect on Power, Love and Leadership.

My most recent, most personal and also longest talk, given at Adobe MAX 2017.

A Facebook Live Interview with the remarkable Seth Godin, recorded in March of 2018.

In Conversation with Chase Jarvis LIVE

My SXSW Interactive Keynote of March 2013:

My DoLectures talk of September 2013:

Hear me explain the idea behind CreativeMornings: