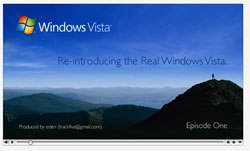 Earlier this week, Bill Gates gave the Keynote Address at CES. In an effort to gear people up for the gadget wizardry they were about to experience on the show floor, Bill touted the revolutionary new features of the upcoming Windows Vista. Baring any further setbacks, Vista is scheduled to be released near the end of 2006. Any Mac users who watched the Keynote were likely unimpressed. This must have been the case with the user who created the following video. Is Vista unique in all of its first of a kind features? You decide.