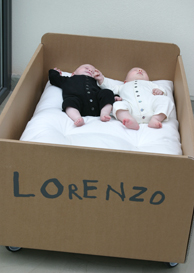 This just had me laugh out loud. And in all seriousness, I actually like it. Customisable Cardboard Cot Bed