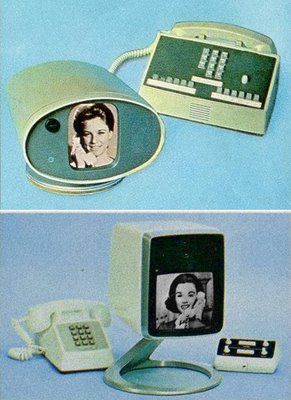 “AT&T conducted experiments and demonstrations of a Picturephone product and service in the early 1960s, including at the 1964 New York World’s Fair. The demo unit was usually in a small oval cabinet on a swivel stand, intended to stand on a desk. Videophones, possibly AT&T units, were featured at Expo 67, an International World’s Fair held in Montreal, Canada in 1967. Several demonstration videophone units were available for the Fair-going public to try, who were permitted to make live video calls to recipient volunteers in the United States.

Picturephone was offered to the public in New York City and Washington DC in the early 1970s. The screen was larger than in the original demo units, approximately half a foot (15 cm) square in a roughly cubical cabinet. Picturephone booths were set up in Grand Central Station and elsewhere. With fanfare, Picturephones were installed in offices of Westinghouse and other progressive companies