Notes from The Feast Conference

Today’s Feast Conference was truly inspiring and made me think! What impressed me the most were the attendes; every person I spoke to was a “Doer”. Jerri Chou and Michael Karnjanaprakorn of All Day Buffet did a fantastic job in organizing The Feast and I can hardly believe this was their first attempt at organizing an event of this magnitude. Can I just say that today’s lunch was the most delicious catered food I’ve ever had? I can’t wait to see what Jeri and Michael pull together next year, when The Feast continues.

I was prepared to live-blog like the other day at CLICK but unfortunately they didn’t have wireless. Here’s a quick summary of some of today’s presentations: 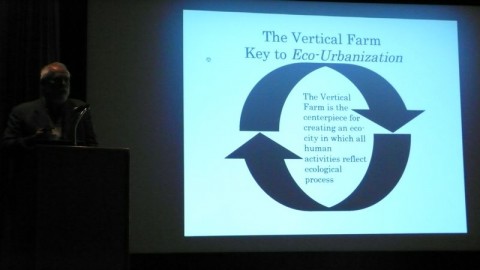 Dickson Despommier (how cool is this name?) spoke on trying to find new ways to integrate agriculture into city environments. Why? In 50 years from now it wont be possible to feed the people the same way we do today, as there’s just not enough resources. By the year 2050, nearly 80% of the earth’s population will reside in urban centers. Applying the most conservative estimates to current demographic trends, the human population will increase by about 3 billion people during the interim. An estimated 109 hectares of new land (about 20% more land than is represented by the country of Brazil) will be needed to grow enough food to feed them, if traditional farming practices continue as they are practiced today. The solution: Vertical Farming.

Interesting fact: NYC consumes food that needs the state of virigina to grow! 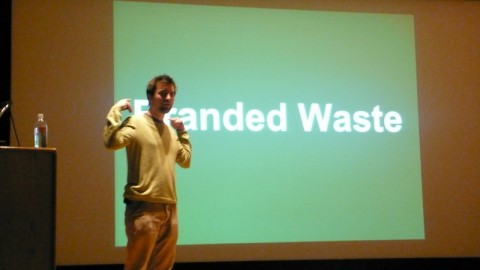 Tom Szaky of Terracycle spoke on Eco-Capitalism 2.0: The Next Generation of Green Practices That Increase Profits.

I was hugely impressed by Tom Szaky‘s presentation, founder of Terracycle. He was speaking on the next Generation of green practices that increase profits. The TerraCycle Story is a tale of ultimate Eco-Capitalism. The company’s flagship product, TerraCycle Plant Food™, is an all-natural, all-organic, ‘goof-proof’ liquid plant food made from waste (worm poop) and packaged in waste (reused soda bottles)!

Tom is a firm believer in ‘upsycling’, which means creating a new desirable product out of ‘garbage’. Examples are: Juice pouches made into bags, Corkboards, Wastewrapperpaper Notebooks etc.

Big corporations took note of Tom’s cause and are building partnerships. As an example he mentioned how they teamed up with Target and created the first reusable shopping bag made entirely out of recycled plastic bags. Big companies today are craving solutions that are sustainable as long as they can prove it.

Tom’s credo: There’s no garbage that can not be upsycled into something else. 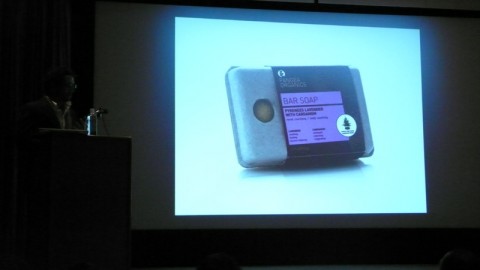 Joshua Onysko of Pangea Organics talked about the The Fringe of the Fringe:

Joshua got into making soap out of a desperate ‘bonding attempt’ with his mom, little did he know that it would soon change his life. He is now the proud owner of the fastest growing organic skin care line in the world that brings you the fastest growing packaging in the world. What impressed me the most is Pangea’s innovative packaging. All product boxes are made with Zero Waste process with 100% post-consumer paper and organic seeds like sweet basil and amaranth. Simply slip off the label, soak the box in water for a minute and plant it in the earth. Also, all labels are screenprinted as the labels that you traditionally stick on produce too much waste. Pangeas is just starting a new initiative that will empower the consumer to plant their own trees with seeds that will be in the packaging of their product. Joshua believes in getting the consumer in touch with what we can do on our own. Impressive! 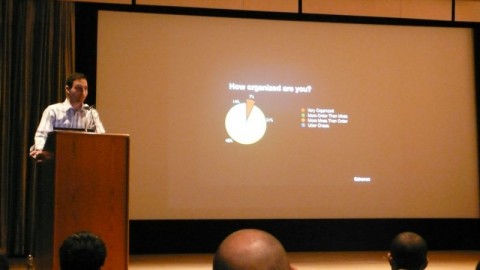 Scott Belsky believes that the greatest breakthroughs across all industries are a result of creative people and teams that are especially productive. As such, Scott has committed his professional life to help organize creative individuals, teams, and networks and is the founder of Behance, a company that develops products and services that boost productivity in the Creative Professional Community.

Generate Ideas in Moderation: Don’t get off track with a new idea. Too many ideas can be a problem as well. (The IdeaSyndrom)

Organizing with a Bias to Action: How to balance the two. Compromise! Always focusing on whats actionable.

Share ideas liberally. Leverage the community around you. Don’t be scared of sharing ideas. Sharing ideas early is a great way to hold yourself accountable and making them stick.

Fight your way to breakthroughs. The most productive teams encourage fighting and discourage apathy. As a leader of any type of idea you have to make sure people keep on fighting.

Leaders Talk Last (Silence the Visionary) If you speak first you fail to listen to new ideas as your your team will just follow your lead. Listen first!

Hiring someone? Judge Based on Initiative (Not Experience) Focus on the Initiatives they showed in their past. People that show that they take initiative to things that are important to them are likely do to the same for you if you get theme excited about your idea.

Unique is Opportune. We all have to gain confidence. Nothing extraordinary has been achieved through ordinary means.

One new service Behance is offering is the Action Method, a radical approach to productivity and project management. Unfortunately he ran out of time and couldn’t tell us more about their new online service. View and Action Method Demo. 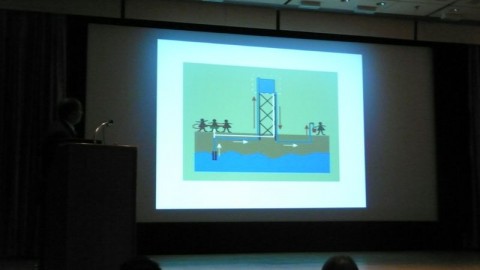 Dale Jones of PlayPumps International: An engineer in south-africa came up with a concept that allows playing children to pump water up from the ground. Simple and efficient. Learn more.