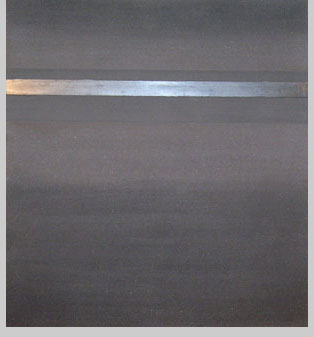 “Miya Ando Stanoff is a minimalist metalworker; employing steel and pigment to create quiet, meditative environments. Working solely in two-dimensional metal panels, she is ultimately interested in the study of subtraction to the point of purity, simplicity and refinement.

Miya is a graduate of UC Berkeley and attended Yale University where she studied East Asian Buddhist Iconography. Half-Japanese and half-Russian, she was raised bilingually and in two cultures, living both in her family’s Buddhist temple in Japan and in Northern California. She comes from a tradition of metalworking, as she is the descendant of Bizen sword maker Ando Yoshiro Masakatsu. Her work appears in over 100 private and public collections, both nationally and abroad. She is currently based in the San Francisco Bay area.”

I hope I’ll be able to see some of Miya Ando Stanoff’s art work in ‘person’ sometime. Looks absolutely beautiful!