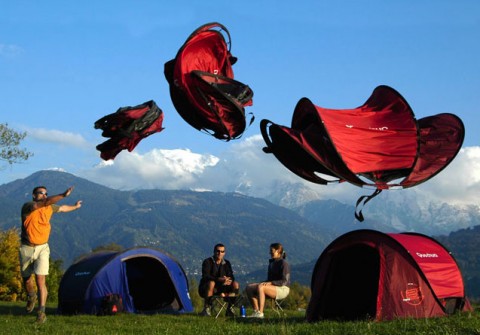 No, I am not and ‘outdorsy’ person, but this tent had me look: Instant shelter | 2 second tent.

This tent is a bit bulky and heavy (3.5 kgs) for hiking, but good for car or bicycle trips. The cool thing is that it sets up in 2 seconds. You just have to throw it in the air and boing!, you are ready to sleep in two seconds (hence its the name). I found that two seconds for fold-out is realistic, except when it lands on its roof and, you’ve got to roll it over, adding a few more seconds. Once done, you’ve got to pitch it down with 2 stakes if the wind is moderate, 4 more if there is any more wind.

The manufacturer, Decathlon, claims one needs 15 seconds to fold it away. With some training you can get it down to less than one minute, for sure, on a lazy day, including all accessories. You just have to expulse the remaining air, and put it in the bag. When folded it is a disc a bit larger than a 28 inch bicycle wheel (around 80cm in diameter). It’s too large to fit into a backpack, but you can hang it on the exterior of a pack. If you do that you’ll look like a dwarf holding his shield. It could fit on the back of a bike, but really it is made for car camping.

The tent sleeps two. The room is 145 x 245cm, so it could be possible to sleep three, but not for a long time. One advantage is that the roof is flatter than an igloo, like in a tunnel. Inside it’s a pretty standard tent, with a double roof, and nets for venting.

All in all, it’s not the perfect tent, but a good tent, light enough, larger than a regular pop tent, and a lot of fun. I like to open it several times just because it’s amazing.