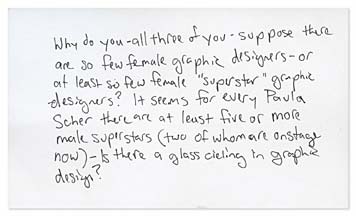 Michael Bierut’s write up about the Milton-Glaser’s-Foot-in-the-mouth-moment at the “The Art of the Book: Behind the Covers” event.

[Glaser said] that the reason there are so few female rock star graphic designers is that “women get pregnant, have children, go home and take care of their children. And those essential years that men are building their careers and becoming visible are basically denied to women who choose to be at home.” He continued: “Unless something very dramatic happens to the nature of the human experience then it’s never going to change.” About day care and nannies, he said, “None of them are good solutions.”

The crowd was silent except for a hiss or two and then Eggers piped up that he and his wife both work from home and share child care responsibilities — but added that maybe New York was different (although we don’t think Eggers really believes this). Then it was clear to everyone in the room that it was time to move on.