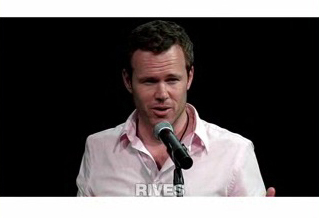 Three minutes of fast-paced, whip-smart wordsmithing from spoken-word artist Rives, who has some unconventional ideas about how the Internet should be run. By turn provocative, touching and flat-out hilarious, Rives is one of the most original talents on the spoken-word scene. He’s a gutsy poet who constantly pushes the limits of the genre: striving to reinvent the form, and find new contexts to make poetry relevant. Rives originally trained as an engineer, and he writes pop-up books for children on the side. (Recorded November 2006 in New York, NY. Duration: 4:15)