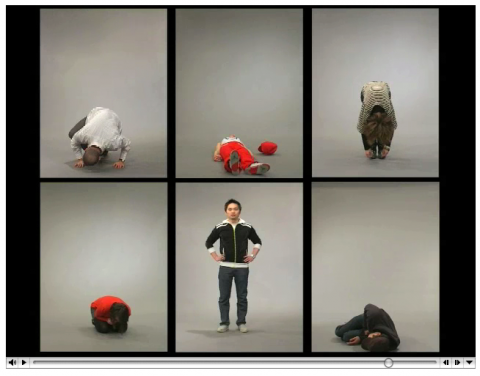 Freund Hein is an anachronistic German vernacular expression, ‘Hein’ being the impersonation of Death as an unwelcome ‘friend’ knocking on one’s door. In Elisabeth Smolarz’s latest video installation she conceptualizes a performance based film project as an exploration of the question of death. Since the human death is typically hidden from everyday life, what is the source of our death-image? She asked people of different ages and backgrounds to ‘to die’ in front of the camera. The participants were free to improvise in whatever way they wanted to pretend the act of dying. Some choose to be ‘shot’, some were ‘stabbed’, some ‘chocked’, others said ‘good bye’, laid down and ‘died’. The sequences of these performances were mostly short, not more than a few minutes, which shows that most people imagine the act of dying as an abrupt event, a crass unexpected rupture in the experience of an everyday time continuum.