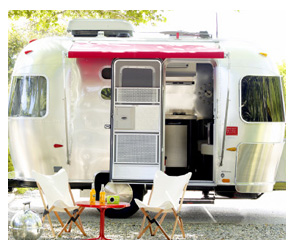 An avid outdoorsman, Airstream founder Wally Byam married a woman who had little interest in the “adventure” of sleeping on the ground. When he built his bride a tent on a Ford Model T chassis that he could tow behind the car, marital bliss was restored. The project gave Byam an idea for a travel trailer that moved like a “stream of air” and in 1936, America got its first look at an Airstream.

Priced at $49,066, I realize that the Design Within Reach Airstream is way out of reach for most people, one has to have dreams. What a beauty