Michael Surtees Discerns the Good, the Bad, and the Odd in Curbside Culture 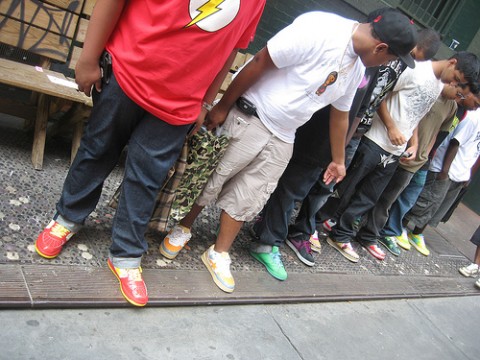 A couple months ago my friend Michael received a call from New York Magazine asking if he wanted to take part in a new feature that would have designers going around the city taking photos of things that interested them in terms of culture outside, in subways, on storefront windows etc.

For about a week he would go after work and spend a couple hours walking around photographing anything that he found interesting. Which visual person, new to New York City, would not enjoy that?

I vividly remember my first few months in the big apple. I was shooting about 10 rolls of film a week. (the good old days!) And I noticed how after a few months, my eye would adapt to the NYC landscape. It took a friend visiting and pointing out ‘the unusual’ to get the ‘fresh’ eye again. This is surely something swissmiss would have enjoyed as well.