The Black Swan: The Impact of the Highly Improbable 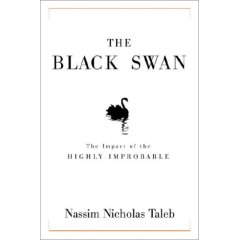 …The problem, Nassim explains, is that we place too much weight on the odds that past events will repeat (diligently trying to follow the path of the “millionaire next door,” when unrepeatable chance is a better explanation). Instead, the really important events are rare and unpredictable. He calls them Black Swans, which is a reference to a 17th century philosophical thought experiment. In Europe all anyone had ever seen were white swans; indeed, “all swans are white” had long been used as the standard example of a scientific truth. So what was the chance of seeing a black one? Impossible to calculate, or at least they were until 1697, when explorers found Cygnus atratus in Australia.

Nassim argues that most of the really big events in our world are rare and unpredictable, and thus trying to extract generalizable stories to explain them may be emotionally satisfying, but it’s practically useless. September 11th is one such example, and stock market crashes are another. Or, as he puts it, “History does not crawl, it jumps.” Our assumptions grow out of the bell-curve predictability of what he calls “Mediocristan,” while our world is really shaped by the wild powerlaw swings of “Extremistan.”….

The Black Swan: The Impact of the Highly Improbable

, by Nassim Nichoals Taleb sounds like a challenging and interesting read. I just put it on my list of ‘books to read‘.