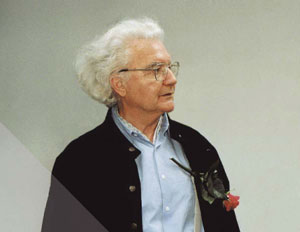 Tomorrow (May 24, 2008) is Adrian Frutiger’s 80th birthday. Send him a birthday message here. Frutiger is one of the most influential type designers of the 20th century; his Univers and Frutiger typefaces are still ranking amongst the most commonly used fonts today. His types include Meridien, Egyptienne, Serifa, OCR-B, Centennial and Avenir.