FOWD: Ryan Singer on the Future of App Interface Design 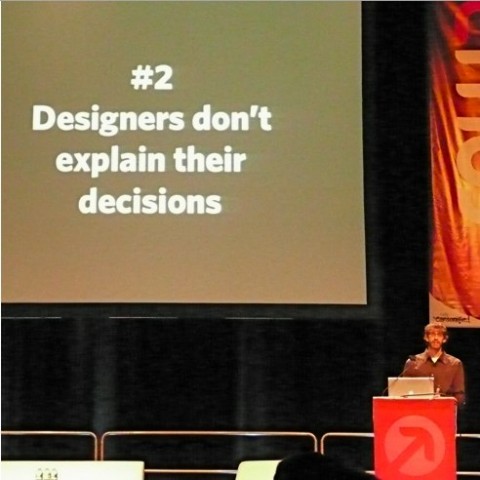 I am attending FOWD today, the Future Of Webdesign Conference. I was hoping to live-blog from the event but unfortunately there’s no Wifi. (I am sitting at a Starbucks down the street, using the morning break to get this first post up. A webconference without Wifi? Apparently, they would have had to pay the venue $12,000 for it. Outch! I can’t wait for the day where we will laugh at this silly no wifi-concept.)

The keynote speaker Ryan Singer of 37 Signals spoke on the future web app interface design. Two issues Ryan sees coming up over and over again:

1. Designers aren’t working with Programmers: The lack of communication between designers and developers leads to weak products. He explains how designers at 37 Signals get involved in the software process from the start. He believes in empowering designers by no longer having them just hand off pixelperfect designs but to take a stab at the code and therefore not giving up control. Like in so many of his talks before, he iterated the system they have in place which basically skips designing in photoshop files alltogether. They go straight to html and only use photoshop occasionaly by taking screenshots of their html mockup to quicky experiment with typography, colors etc. They then proceed to trash the psds.

2. Designers don’t explain their decisions:
There’s this perception designers are creative and therefore irrational people that can’t explain what they do and why they do it. Rarely do we find a designer that can explain. We, the designers, have to make things clear and we have to make sure we can explain our decisions along the way. Designers aren ‘t just making applications pretty, we have to make them useful. We have to inject usability and sense into an Interface Design. And while doing this, we have to always keep in mind WHY? We have to open the door to conversation and make an effort to explain ourselves rationaly.

His message to fellow designers:
Explain why. Identify arbitrary versus meaningful decisions. Explain cause and effect. We have to show our expertise above of making things pretty. Designers who can work directly with developers and explain their rationale are in demand.