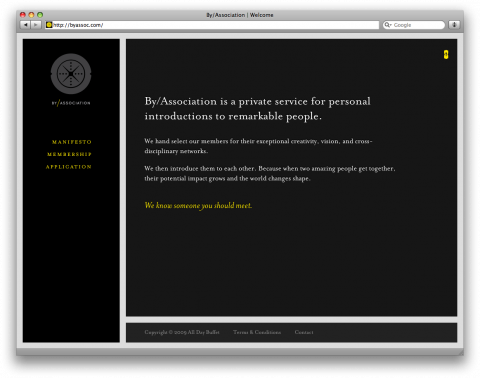 By/Association seeks to reinvent the traditional notion of “networking” by enabling substantive interactions and long-term relationships. By/Association is for people who want to make their lives, ideas, and networks richer by meeting other remarkable people. It’s not about getting help with your current need or project. It’s about connecting to people that make you better — to inspire more action, better ideas, and new ways of seeing the world. They hand select their members for their exceptional creativity, vision, and cross-disciplinary networks. They then introduce them to each other. Because when two amazing people get together, their potential impact grows and the world changes shape.

By/Assocation is launching its first memberships in New York City and San Francisco in July 2009. As a gift, the first few accepted will be established as the “100 founding members” for their city, which includes waived membership dues through 2009. Apply!