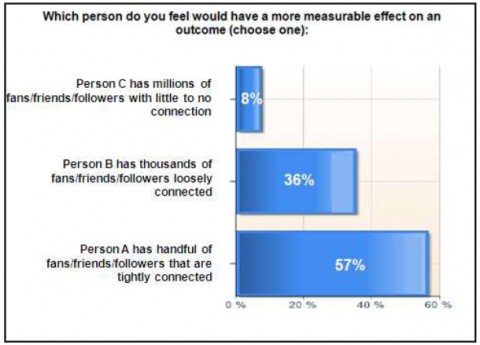 This FastCompany article tries to explain how one can measure influence in social media. As example they are using Bono vs LadyGaga. The article is based on a whitepaper by social media monitoring firm Vocus. What is the main quality of an influencer? Excerpts from the article:

The key finding here is that there is a clear difference between “influence” and “popularity.” About 90% of respondents noted this distinction; however, 84% also said there is a correlation between “reach” and influence,” which adds a bit of ambiguity.

According to the survey, the top contributing factors that make a person or brand influential were all based on quality rather than quantity. Around 60% of respondents cited the “quality or focus of the network” (e.g. 4chan) and 55% cited the “quality of content” (e.g. Andrew Sullivan) for what defines an influential.

But the most important metric for measuring one’s influence online is also the most disagreed upon. With social media, there are so many methods of quantifying “influence” that respondents were fragmented. Close to 29% of respondents said “action” is the most important measure of the effectiveness of social media influence; however, more than one-third also said “action” was the least important metric. The number of “views” was ranked highest by 11%, tied with “click-throughs.” “Retweets” and Facebook “Likes” came in last place.

Unfortunately, when it came to Lady Gaga versus Bono, Vocus didn’t offer an end-all decision.

We have been talking about this topic quite a bit here at the studio. The most interesting experience we’ve had is when an aquaintance of ours tweeted about TeuxDeux and we expected to get a HUGE wave of retweets and overall echo in the Tweetsphere, given that this person has close to 500,000 followers. Not much happened at all. BUT, we had another person from the web-industry tweet about it, and the response was impressive. This person’s tweet follower count: 60,000. There you have it: Quality over Quantity.