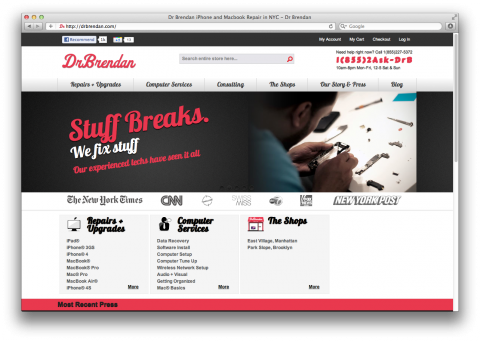 In september of 2010 I discovered iPhone Doc Dr.Brendan. After a quick email exchange and a description of my ‘patient’ we met up in a hotel lobby in Manhattan. 20 minutes later my iphone looked like new. Impressed by his story I wrote a post about him, which apparently sent a lot of new customers his way. Yay! Well deserved!

I luckily didn’t need Dr.Brendan’s services since, until 2 weeks ago, when my husband dropped his new iPhone 4s in water. Outch! I emailed Dr.Brendan and an hour later, Tony, one of his employees was in our living-room, trying to ‘revive Siri’. But there was no heartbeat! He took “Siri” with him and a few days later, we got a call with good news: Siri was alive and kicking! YAY!

During the short visit at our apartment, I learned that Dr.Brendan since has moved his business out of his living-room and opened two stores. And not only that, he has a whole army employees and they now also fix Macs. I was thrilled to hear that as my 2.5 year old iMac at work was giving me a hard time. Tony, a Dr.Brendan employee, came to promptly pick it up the next day and conveniently brought it back a few days later, fixed. Pick-up and drop-off? Yes, please!

Dr.Brendan and his team not only fix iPhones but now also repair pretty much any Apple device, do data recovery, help you set up your network and much more.

I can’t praise Brendan and his team enough. Go check out his site. And if you live either in the East Village or Park Slope, drop by their shop. And no worries, if you don’t live in NYC, you can ship your patient to Dr.Brendan.

Yay for this wonderful entrepreneurial story.