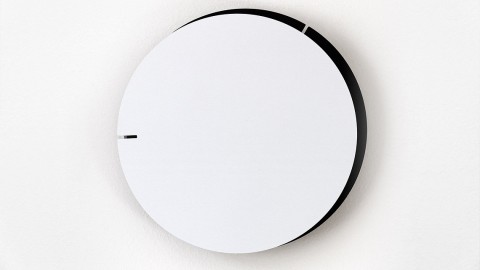 This minimal beauty of a wall clock is called Melancholia and the designers added a seriously poetic product description:

Like the film Melancholia, my clock also consists of two parts. The minute hand is called ‘Justine’, and she deals with her melancholic sister – the hour hand ‘Claire’. And just as Lars von Trier’s planet, Melancholia, devours the Earth, my minute hand will devour the hour hand twice a day. Twice a day the minute and hour hands are at the top together. But slowly, melancholia descends between them like a curtain she has set in motion. It looks like the “sisters” truly suffer from doubts. Twice a day you see them meet and talk about their experiences of being alone. They have different tempos. But they have been two, and, for a brief moment they become one. Alone in the Universe. It’s a scary and sobering thought. As when you see pictures from outer space, you shiver with the sense that we’re awfully alone.