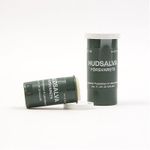 Lip, Body and Other Salve Set: Originally developed to prevent blisters on poor soldiers feets, this wonder salve is mostly being used as a lip-balm today. ‘Mostly’ also refers to ‘Most of the swedish population’. It is “the” lip balm – there really is nothing else competing with it’s popularity over the years and understandably so: It tastes good! It works as advertised, and it has a long range of uses: in swedish military-service, soldiers are instructed to use this to fry with in case there is nothing else and should harsh days pass without food, well, maybe not as tasty as a burger, it would keep you from dying… Also useable as bike-chain-oil, a candle (if melted between fingers and molded around a wick) and in severe cases some sort of hair-goo to get that terrible doo in shape. It contains, amongst other types of oils and fat, peanut-oil, so nut-allergics should avoid this.

Oh, I want one! Just alone the unusual/typographic packaging makes me want one. But then the explanatory copy put me over the edge. Lip balm gone bike-chain-oil, gone hair-goo….? Interesting. Go swedes!