headline of the day: Giant Lego Man Found in Sea 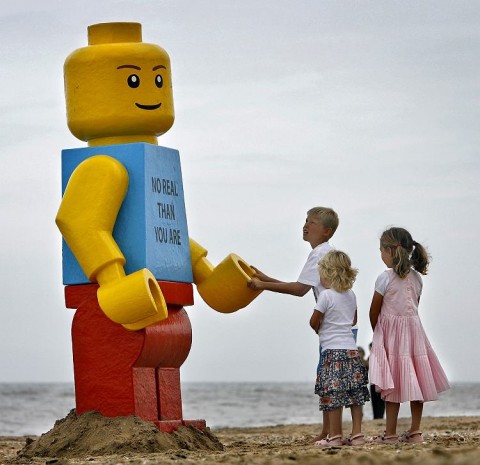 Staff at a drinks stand in the Netherlands resort of Zandvoort were amazed to find a 2.5-meter (8-foot) Lego man washed up on the beach Tuesday. It was rescued from the water and placed upright on the beach, to the delight of children. Nobody had any idea where the smiling Lego figure had come from, but there was speculation it might have come over from England, while suspicious pundits on the Web site Reddit feared it might be a Trojan horse “full of small Lego people about to attack Holland.” However the ungrammatical slogan on the figure’s chest, “No real than you are,” led via a Google search to www.egoleonard.com, a Dutch Web site which appears to belong to an artist or art collective. Perhaps the mysterious figure is just another work of environmental art.

Giant Lego Man Found in Sea, gets the headline of the day award from swissmiss.