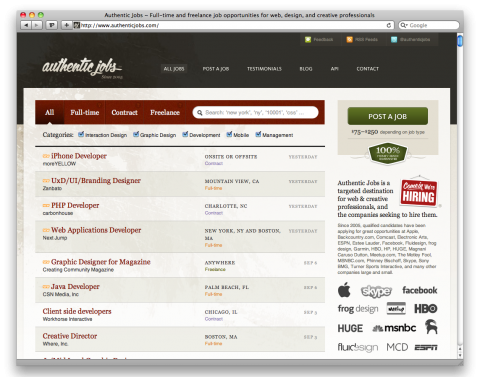 This September marks the five-year anniversary of Authentic Jobs, a network I am a proud member of. (If you’re reading this post on my actual site, look at the “Come in we’re hiring” sign on the left column). What was once a sidebar on cameronmoll.com has grown into a valuable, standalone resource for web and creative professionals. We’re kicking off the celebration in three parts, the first of which went live yesterday at authenticjobs.com/five.

This five year Authentic Jobs anniversary also marks the four-year anniversary of charity: water, a non-profit organization dedicated to bringing clean water to millions of people in developing countries. Almost a billion people on the planet don’t have access to clean, safe drinking water. That’s one in eight of us.

Together, we can make our birthday celebration be about giving gifts to others—$20 gives the gift of clean water to one person. Donate just $20 (or any amount) and help us raise $20,000 for the Bayaka people.

The Bayaka are an African Pygmy tribe. They were one of the last hunter-gatherer societies in the world until the logging industry pushed them out of the forest. Now, they’re learning to live on the outskirts of villages, where they face rejection and abuse by locals who see them as animals who belong in the jungle. Many Bayaka live without clean water in southern Central African Republic.

Help us raise $20,000 to make September’s goal a success and to wish Authentic Jobs, charity: water, and 90,000 Central Africans a very happy birthday.

Get started with your donation >