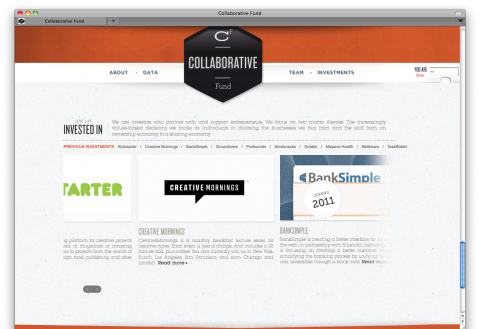 I started CreativeMornings in september of 2009 wanting to create an accessible, inspring morning talk series. Little did I know that it would grow into a global series. With an evergrowing number of chapters, CreativeMornings currently take place in NYC, Zurich, LosAngeles, and SanFrancisco with Chicago kicking off this friday. A London chapter is starting in July and Berlin and Vancouver are going to be kicking off shortly after. All of this has came from the help of my fantastic hosts and their volunteers in every city. It’s impressive that my idea has been received such generous support. Every event fills up within minutes. (Take this week’s first ever Chicago CreativeMornings with Jim Coudal. It was full in a mere 3 minutes.)

And things are only going to get better. Why?

In the winter of 2010 I had the pleasure to meet Craig Shapiro, former president of GOOD Magazine and now force behind Collaborative Fund. Craig took me out to lunch and I could tell he was interested in CreativeMornings. To my surprise, he was so interested, he asked if he could become a partner. I was stunned to say the least. We are talking about a man that has invested in companies like Kickstarter, Skillshare and BankSimple. I was speechless.

Curious as to why he wanted to become a partner,  I continued to listed. He explained that he is drawn to CreativeMornings because of two important things:

a) There is a new breed of entrepreneurship and it is based on using creative facilities to solve big and small problems.

b) When you Bring like-minded (creative) people together, magic happens. New projects, job and business opportunities, friends and much more can all come from thee meaningful gatherings.

After my initial shock, I realized what an incredible gift it was to have met Craig. I can tell that he understands my vision for CreativeMornings and seems as excited as I am to make it happen. Craig obviously is a very smart business man and I am excited to know that I have a skilled partner to help me navigate the CreativeMornings ship. His support is allowing me to spend more time on CreativeMornings and focus on growing the series.

Beyond that, we here at Studiomates love when Craig comes and hangs out at our space. He is fueling our entrepreneurial spirts and is just an overall wonderful person to have around.

I am excited and incredibly humbled to be part of Collaborative Fund. This year cannot get any better, I think.

(raising my glass of bubbly stuff in excitement)