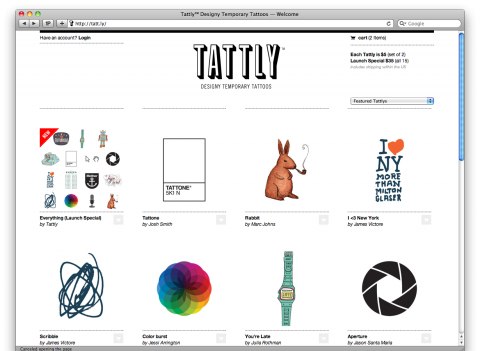 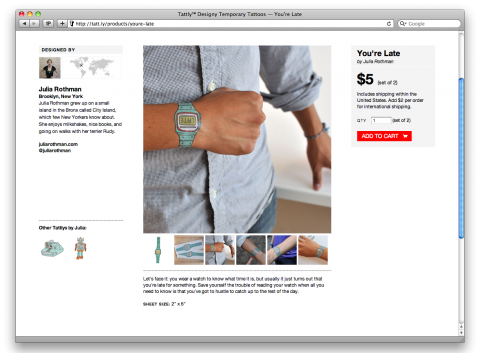 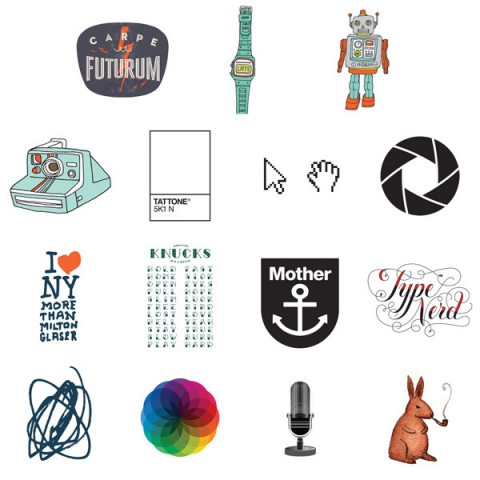 I have exciting news! We just launched Tattly, a temporary tattoo store for design-minded kids and kids-at-heart. After applying many bad-clip-art tattoos on my daughter Ella, I decided to stop complaining and take matters into my own hands. I was ready to put designy, cool, typographic tattoos on my daughter, or myself for that matter. The idea for Tattly was born.

I looked through my rolodex and reached out to fellow designers I admire to see what they thought of the idea. The response was overwhelmingly positive. Within days I received my first tattoo submissions. And now, a good two months later, we have a site, a team and an impressive fulfillment-centerlike-set-up in our studio. Team Tattly is ready to ship and rock the world of temporary tattoos.

I get giddy when looking at our current list of contributing designers.

Tattlys are perfect for people like me, that can’t commit to a real tattoo and for designer parents, that want to raise their kids with style. Tattlys make a perfect small gift and sure will make your friends smile. Can’t decide which one to get? For two weeks only, you’ll be able to buy the Launch Special Everything Pack! (Shipping is included in the US and only $2 internationally. Yes, we ship *everywhere*!)

I could not have done this without my awesome Tattly team Rusty and Yoko. And our newest Studiomates member Kevin, who proved be an impressivley talented temporary tattoo model. He was even game to model all Tattlys for the Everything Pack.

And then there are my wicked smart and talented studiomates of Oak. They developed the site with all that responsive goodness. (Go resize your browser window or try the site on a mobile device!) The shop runs on Shopify, which, according to Team Oak, “was almost as painless to set up as applying a Tattly to your bicep”. (I’ll be writing about the Shopify experience in the coming days, just so much for now: Their iPhone App ROCKS!)

It’s a big day here at swissmiss studios! Tattly is born! I am so happy I might burst.

Now, the question is: Which one is your favorite?