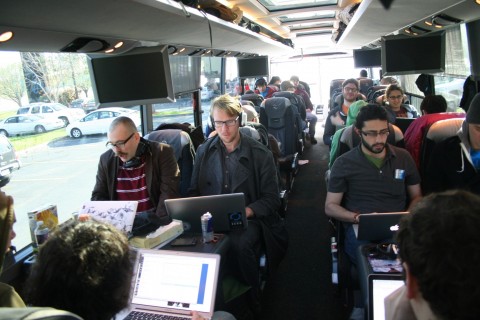 Imagine this: You and a team of strangers, on a bus, traveling at 60 miles per hour, have 72 hours to conceive, build and launch a startup. That’s StartupBus in a nutshell.

StartupBus began life as a joke, a roadtrip starting in San Francisco with friends, but with the twist of launching a startup on arrival in Austin in time for the SxSW technology conference. Somehow though, people thought Elias Bizannes (the founder) was actually serious. A few unexpected blog articles and many emails later, he was stuck with having to now make good on his pub night promise.

StartupBus has since evolved into a competition and grew six-fold with buses departing from San Francisco, Silicon Valley, Chicago, Cleveland, New York, and Miami. In 2011, an impressive 156 ‘buspreneurs’ participated who produced 38 different products.

Talk about turning an experiment into an international community! I can’t help but chuckle at the term Buspreneur. To become one, apply to the StartupBus.

StartupBus – what a refreshing and charming concept! Hat tip!