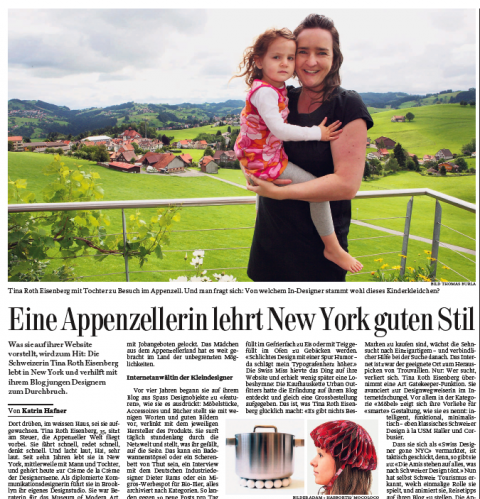 I am excited and feel honored by today’s article about me in the Tagesanzeiger, one of Switzerland’s biggest newspapers. (Even our little Ella Joy made it in the picture. Yay!) A big thank you to Katrin Hafner, the lovely journalist and the photographer Thomas Burla who both came out to the Appenzeller hills for the interview/photo shoot.

Article (pdf), in german only. (English translation below)

My wonderful friend and talented writer Martina Kink was so generous to translate the article. Voila, here it is:

You can’t miss with swissmiss, by Katrin Hafner
(translated by Martina Kink)

Tina Roth Eisenberg, aka swissmiss, is a Swiss designer living in New York. Her blog, swiss-miss.com, is not just hugely popular among young creatives, but also exactly the kind of break young unknown designers need to make it. Whatever Tina posts becomes an instant hit.

“You see that white house over there? That’s where I grew up.” Tina Roth Eisenberg is at the wheel as Appenzell, one of Switzerland’s most picturesque landscapes, flies by. She’s driving fast, she’s talking fast, she’s thinking even faster. Her laugh – HA! – is like a little explosion. Tina, a communications designer, moved to New York 10 years ago and has slowly but steadily made her way to the top of the design scene. She has worked as a consultant for MOMA, is repeatedly asked to be on the jury of design competitions and headhunters are constantly at her heels. Today, Tina owns her own design studio in Brooklyn, where she also lives with her husband and 3 year old daughter. The girl from Switzerland has come a long way.

Internet agent to the young, willing and able.

4 years ago, Tina started to feature design objects on her blog, mostly furniture, accessoires and books. She presents them with little text and amazing photos, and always makes sure to give credit to the artist or producer by linking to the respective websites. She definitely has a knack for finding good style on the web and whatever sparks her interest and curiosity or just plain makes her laugh appears on her blog. Whether it’s a drain stopper, a commercial for organic eggs from Swiss supermarket Migros or an interview with industrial designer Dieter Rams, it’s on there, and it’s neatly archived. This way, she manages about 30 new posts each day.
Her blog is not about selling things. Tina believes in creativity and networking and made it her quest to feature other designers and creatives, for free. This is exactly what made her insanly popular, and rightly so: Her website swiss-miss.com is the single most linked Swiss blog ever. Her readership grows day by day, and by now, she has more than half a million clicks per month. This enables her to almost live off the network she created.

A little R&R with Röschti

Tina is sitting on the terrace of her rental vacation home in Appenzell, Switzerland, surrounded by green hills and the sound of cowbells that make a nice change from NYPD sirens. She’s dressed in all black, with very little make-up and jewellery. Her iPhone and Macbook are nowhere to be seen, and inside her husband and daughter are having pasta.

“My blog is huge” she says, and there’s not a trace of arrogance in that statement. The fact that Khoi Vinh, head of design at New York Times online, reads her blog leaves her both proud and incredulous: “Can you believe that?!”
If swissmiss posts a product on her blog, it might very well be sold out within hours. She has that kind of influence and power, and she has changed at least one young designer’s life: He pitched his idea to her via email: a tray with cut-out letters that you can use to make letter-shaped cookies or ice. “Pure simple design with humor – it made my typographic heart beat faster”. Tina presented the idea on her blog, where Urban Outfitters discovered it and immediately placed a big order. This is what makes swissmiss happy: “There’s nothing better than to help a designer who’s just starting out and give him a chance. Everybody wins: The artist gets public knowledge, I get a kick out of it, and to my readers, I’m kind of a taste-maker, somebody who shows them the good stuff. It’s like being an advocat for young undiscovered talent.”

What exactly is good design, Ms. Roth Eisenberg? Pause. It’s totally subjective, she answers. Is she afraid of being considered an expert? “A lot of people expect way too much of me. I just point out what I love and think is amazing, that’s all”. But she does it in a totally consequent manner. Swissmiss constantly finds rare design gems on the web that nobody knows about and that you don’t see on any other blog. She boosts the economy by showing her very own style. People love that. There are readers who gladly and proudly announce they furnished their whole appartment swissmiss style.
In times of globalisation we all long for individuality, but we need help. The internet is a good way to go, but it is also enormous and you can easily get lost. Tina is sort of a gate keeper: She knows her way around the jungle and she is happy to help you out. Especially when it comes to furniture, her love for smart design is obvious: intelligent, functional, minimalist – classic Swiss design à la USM Haller and Corbusier.

Calling herself “Swiss designer gone New York” also proved to be a very smart move, as she readily admits: “Americans love everything that even remotely sounds Swiss.” Lately, the Swiss Tourism Board noticed her influence and approached her about travel tips for Switzerland on her blog. “Why not?” Tina says. “I love Switzerland. I just can’t picture myself living here again – it’s just way too slow for me.”

Pure luck is what brought Tina to New York, and she also refers to good luck when it comes to her amazing career. “I got lucky” she says, “after my Masters at Munich’s University of Art, I was looking for a 2 month internship in New York. I got a working contract and a visa out of it.” She also lucked out when it comes to her upcoming lectures at the New York School of Visual Arts, or when she totally hit the hipster nerve with her Creative Mornings. Every month, Tina invites designers and everybody interested to a creative breakfast meeting, with presentations, Q&As, disussions, and the possibility to network. By now, these mornings in New York are booked solid within minutes after she announces them on her blog. Apparently the creatives of New York just long for personal contacts beyond their screens after all. And it seems we all just lucked out a little for knowing about swissmiss and her blog.

And Tina? After all these years in New York, she still longs for her daily Swiss products. Before she gets on the plane back to Brooklyn, she always makes sure to stock up on deodorants, spices from Schmid-Metzg, and her favorite socks. HA!