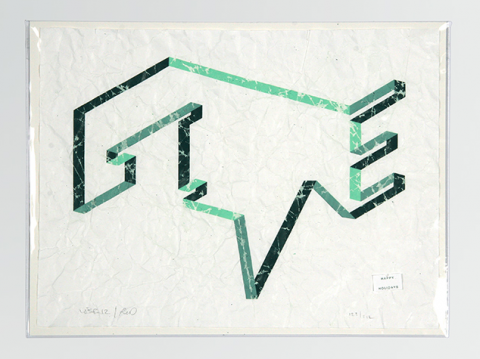 How incredibly stunning is this GIVE graphic by Topos Graphics?

Inspired by the act of giving rather than by giving a gift, Topos Graphics gifted an idea for their 2007 mailer—GIVE. The lettering to them was both a form of giving the gift that keeps on giving and wrapping their intention—the ribbon having no clear beginning and no defined end. And to point at their intention (rather than the gift) we took away the preciousness of the print by adding a marked history to the paper. By crumpling and re-flattening the print it was as if the gift had already been given and the wrapping paper already effectively been tossed into the recycling pile. With that in mind, it was the thought that counted—and still counts.

Their edition numbered 212. Every package included a signed and numbered print within acid-free plastic, each labeled with a Happy Holidays sticker that they had custom-printed to be used within a pricing gun.