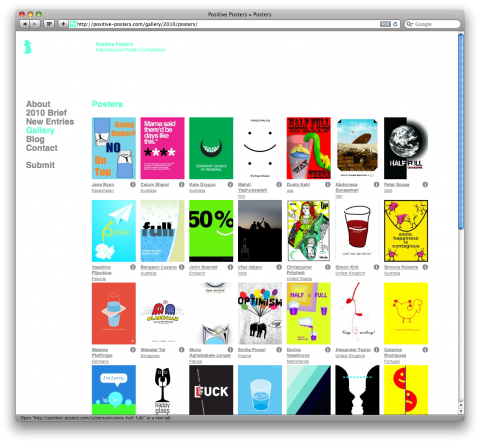 Positive Posters wants to give graphic designers an outlet to create freely, and to use their skills to inspire, challenge and make a positive difference in a non-commercial way.

Positive Posters was founded in 2009 by graphic designer Nick Hallam. It’s an non-profit international poster competition run by a group of volunteers based in Melbourne, Australia.

The competition is held annually between July and October. Positive Posters gives designers two months to create and submit a positive design that responds to the theme of that year. An exhibition is held of the top 30 posters, and the winner chosen by a group of international judges. They then print 4000 copies of the winning poster and paste it all over the streets of Melbourne, Australia. And send a few off around the world too!