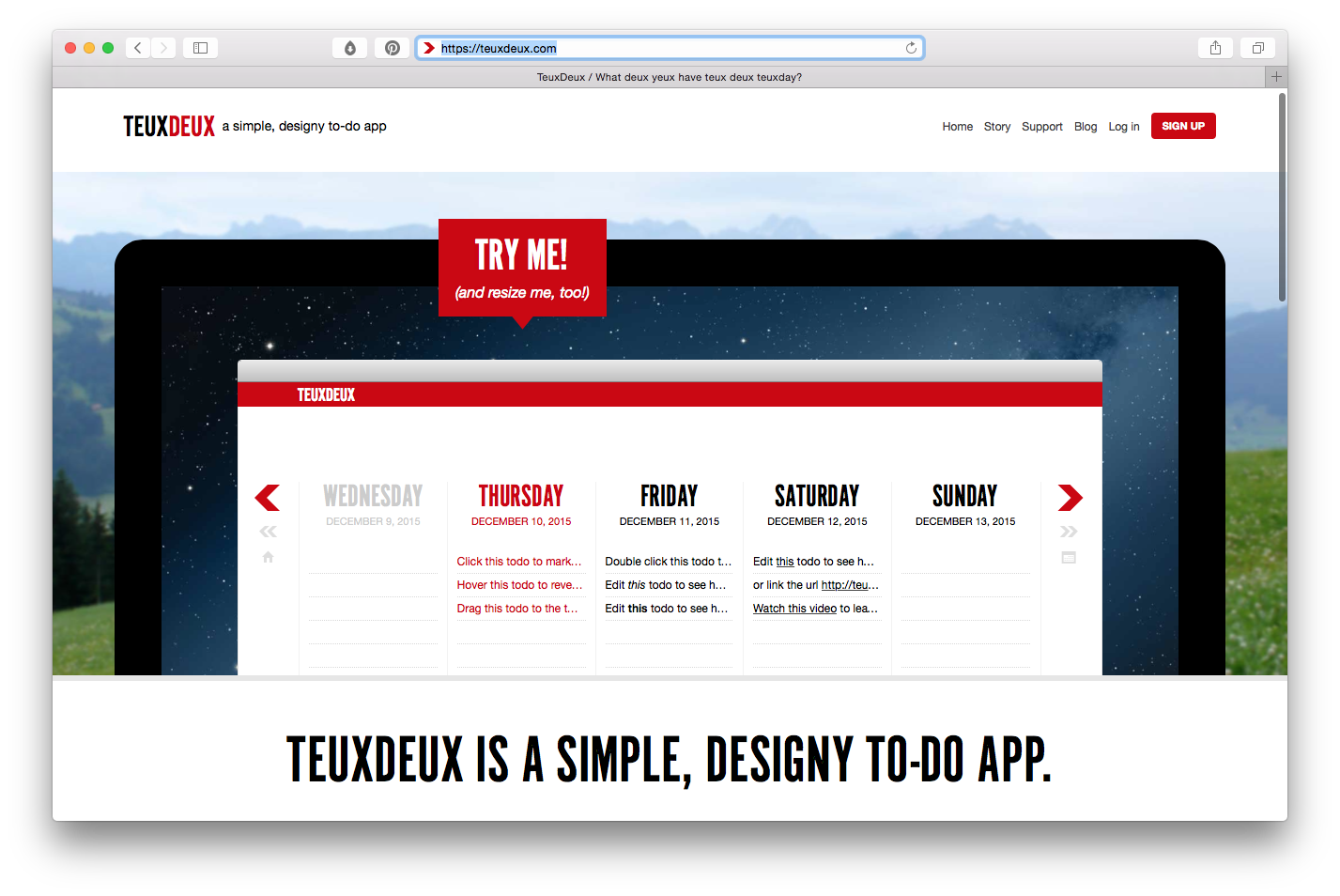 Five years ago today, Cameron, Evan and I announced TeuxDeux, a simple, design-y to-do app. (Cameron’s very first product video still puts a huge smile on my face. Keep in mind, the app UI has changed since then…)

TeuxDeux was born over a lunch conversation where I shared my vision of a calendar based to-app and 3 days later we had a working prototype. 5 years and several updates and revisions later, TeuxDeux is helping keep thousands of happy user stay organized.

The secret is to keep TeuxDeux as your browser landing page, so every time you open a browser window you are being reminded what you should be working on. Organize your to-do’s on our simple, list based calendar view. Cross off what you’ve completed and whatever you don’t cross off, will automatically move to the next day. You can also create your custom ‘someday’ columns on the bottom area for the things that you just need to get out of your head. And, take your to-do’s with you on the go, with our iPhone app.

Happy 5th birthday TeuxDeux. I don’t know what I would do without you.

An app that is tricking me into saving? I am down with that. Might give this one a try: Digit.

An All New TeuxDeux 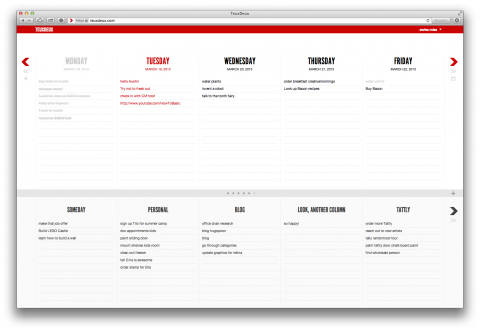 It’s a big day for people like me, that like keeping lists: We just launched a brand new version of TeuxDeux – the minimal calendar based to-do app that started in 2009 over a lunch conversation between Cameron and myself.

For the past 6 months, Team FictiveKin, Jonnie Hallman and myself worked hard to bring you a completely revamped, better TeuxDeux.

If you’re an existing user you will be happy to hear about our updates, as we integrated many of your requests! We made the site much, much faster and responsive. Try to resize that browser window over on teuxdeux.com and see what happens to the app in the top part of the screen.

If you need a little bit of extra formatting, you’ll be glad to know we support Markdown, so you can make important words bold and links clickable.

We’ve added recurring to-dos. If you’re worried about forgetting to water the plants, just write ‘every week’ after your to-do (i.e. water plants every week) and it shows up in your TeuxDeux.

The Someday section at the bottom now allows for custom lists. Need columns for specific projects? Need a column for groceries? You got it. Add as many as you need and drag and drop to where you want them to be.

Overall we tried to make TeuxDeux even easier to use and closer to piece of paper. Type in your to-dos right where you want them, move them around to suit your schedule, then click to mark them done.

We’ve also added the option of downloading your data. Your to-dos are important, and we want to take good care of them.

As I explained in an earlier blog post, with this new version, we are moving to a subscription model. We have seen too many startups close shop and shut down their product. We do not want to see any of this happen to TeuxDeux. We love the app too much and want to keep the lights on.

Once your trial is over you have the option between $3 monthly or $2 if you pay for the year.

Relaunching an app (plus iphone app) from scratch is a tad bit tricky, so we are experiencing a few issues with iOS logins for those folks that have special characters in their password or usernames. If you have a huge amount of to-dos, you might experience minor errors. We are on it. Reach out to our support [email protected] and we will take care of you asap. Or reach us on twitter @teuxdeux.

Here’s a little video of Cameron demoing the new TeuxDeux:

And here are some of the nice things people have been saying about Neux TeuxDeux:

The overhaul of @teuxdeux is fantastic. Glad to see they could improve upon an already-great product.

Believer. @teuxdeux annual subscription purchased. Terrific UI updates to the app I use every day.

There’s no service I’d be happier to pay for than @teuxdeux. It’s the To-Do list of my dreams and my world would implode without it!

As a hardened non-todo-list user, I’ve taken to the new @teuxdeux and it’s super. @destroytoday has done a great job bit.ly/XMwEoi

@teuxdeux Thanks. It was one the longest gestation period for an app launch and built high expectations.you surpassed them. #stampofapproval

Exobrain is a Brainstorming tool and interactive web application that lets you visualize your thoughts, finds unique connections between words, and pushes past obvious ideas.

Reminds me of my Visual Thesaurus days when I was the Design Director at Thinkmap. 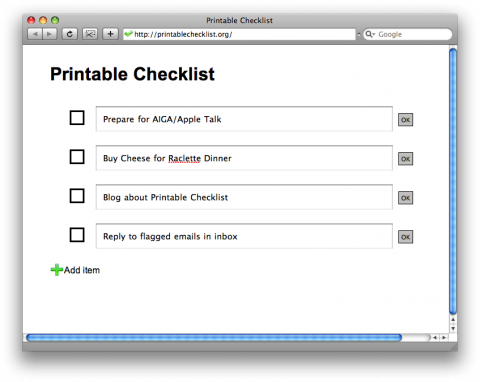 I agree with Tom: Printablechecklist.org is a ridiculously simple online printable checklist creator. 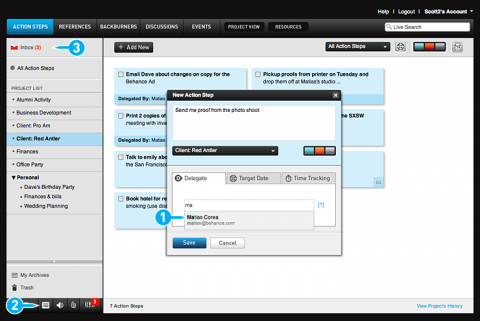 Action Method helps you manage your (life) projects with an emphasis on action. The application not only allows you to organize and delegate action steps but also enables ongoing conversations across all of your projects with anyone that works with you. And with Action Method you can keep all relevant communications (shared documents, solutions to problems, feedback, decisions) in one place.

The “Nag” and “Appreciate” feature made me chuckle: If you need to send a message to your co-worker about finally getting you that document you’ve been waiting for, you can send him a 140 characters ‘Nag’ system alert. And the ‘statistics’ feature will make many studio managers happy; with a click of a button you see what’s been done (or not).

Hat tip off to the Behance team. Action Method is a refreshing new approach to productivity, featuring a clean, intuitive user interface. I am impressed! And knowing this is just the start, I am curious to see the improvements Scott and his team will make over the coming months.

Another wonderful Mashable Resource: 40+ Ways To Access Your Computer Remotely

What I had to do was establish that my relationship with email was broken. Once I did that, I had to figure out how to fix it. Watching Merlin Mann’s Inbox Zero talk helped immensely as did reading his Inbox Zero series. Somewhere in all of that, he states that the way you deal with email has had to change over the last decade. And, he’s right. I just missed the boat and, as a result, got way out of whack.

So, a couple of weeks ago, I silently declared effective email bankruptcy. I moved those 8000+ messages off to their own DMZ folder and started practicing the whole Inbox Zero thing.

7 Ways to Grow the Action Habit

The typical creative process for managing ideas and projects is haphazard. Many creatives lose energy amidst unclear tasks, half-finished thoughts, ideas with ambiguous next steps, cluttered references, and little follow-up in a team environment. “Action Method” tries to bring order to the organic creative process we all use in our work.

Swissmiss is a design blog run by Tina Roth Eisenberg. Besides swissmiss, she founded and runs Tattly, CreativeMornings , TeuxDeux and her Brooklyn based co-working space Friends (formerly Studiomates).