How I Built This: Yves Chouinard

Enjoyed this How I Built This Episode with Patagonia founder Yves Chouinard. He started the company in 1973, to make climbing gear he couldn’t find elsewhere. Over decades of growth, he has implemented a unique philosophy about business, leadership and profit. Incredibly inspiring. Especially, the ant analogy. Have a listen. 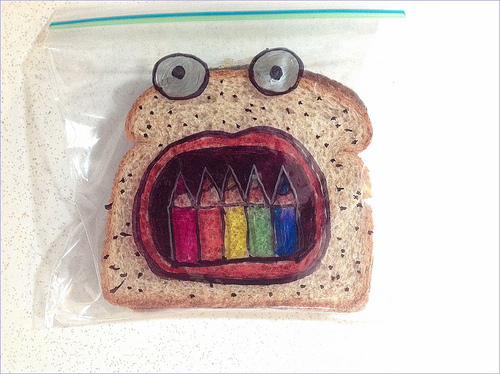 David Laferriere has been drawing illustrations on his kid’s sandwich bags since 2008. While he won’t win the go-green award, he sure deserves the creative dad of the year award. Made me smile! Make sure to see the entire Flickr set. 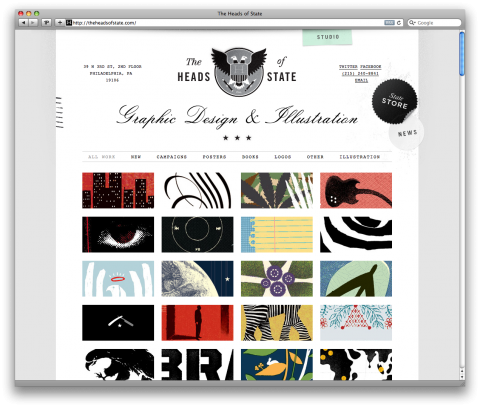 My friends over at The Heads of State (Jason is a former studiomates member) just launched their brandnew site and shop. Seeing their work is quite humbling, to say the least. 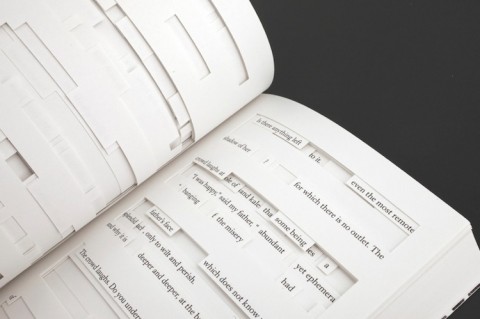 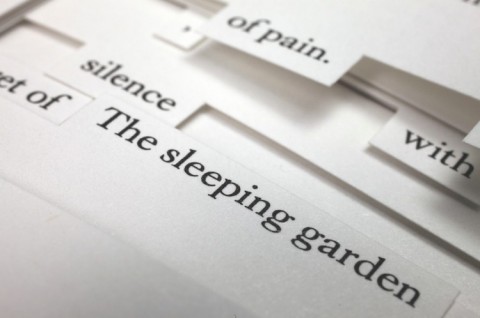 Book printers said Jonathan Safran Foer’s “Unmakeable” Book “could not be made.” Belgian publishing house Die Keure proved them wrong. Jonathan Safran Foer’s book is an interactive paper-sculpture: Foer and his collaborators at Die Keure in Belgium took the pages of another book, Bruno Schulz’s The Street of Crocodiles, and literally carved a brand new story out of them using a die-cut technique.

You can see more pictures of the Tree of Codes on Visual Editions’s Flickr stream. This is gasp-for-air-stunning. At least in my book.

(thank you martina, via fastcodesign)

I just spent the last 45minutes reading and flipping through “Inspired“, a book that looks at how creative people think, work and find inspiration. The only reason I put the book down is because reminders are going off on my computer on what I need to get done. But before I do that, I want to share this gem of a book:

“Inspired” was out of print and has returned by popular demand by BIS Publishers. The book takes a closer look at creative people: what inspires them, how they think and work, how they create an environment where they can easily generate ideas. Forty European creative individuals from many different disciplines, including art directors, fashion designers, architects and photographers, are interviewed. Their working environments, scrapbooks, notebooks, doodles, sources of inspiration an so on have been photographically documented to produce this beautiful, inspiring book.

Love it when other designers let us peek into their process, work space and share little process secrets. “Inspired” over on Amazon. 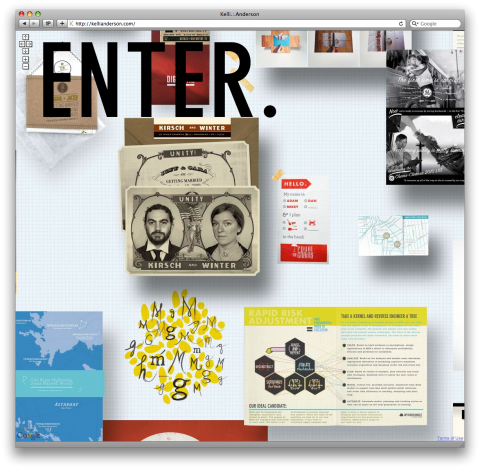 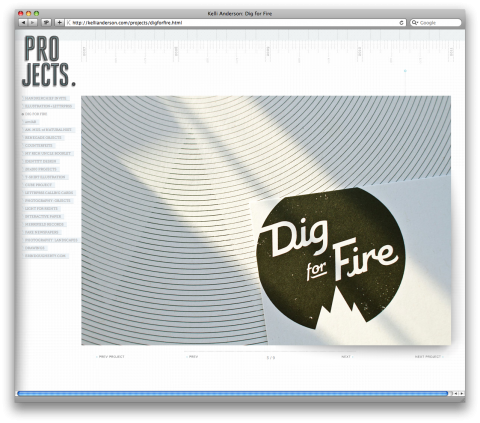 So, I admit it, I am over portfolio sites. I can’t remember when I was last completely excited over seeing one. Until just now. Kelli Anderson emailed me and thanked me for blogging the Handkerchief Wedding Invitation Design a few weeks back. She pointed me to a blog post explaining the entire process. I then clicked to her portfolio site and clicked and clicked and clicked. I am impressed and am sending a big giant hat tip over to Kelli.

ps: Check out the Google Map inspired navigation on the homepage. Quite amusing!

My friend Zachary Lieberman who’s work I highly admire just pointed me to the Kickstarter Campaign he started for his project with and for Tony Quan (aka TEMPT1).

TEMPT1 is an artist, publisher and social-activist based in Los Angeles, California. He was a pioneering artist in the California graffiti scene in the 1980’s and 90’s and influenced a younger generation of graffiti writers with his vision to unite the No-Cal and So-Cal graffiti communities. Sadly, in 2003, TEMPT1 was diagnosed with Amyotrophic Lateral Sclerosis ( also known as ALS or Lou Gehrig’s Disease), a degenerative neuromuscular disorder that causes paralysis and ultimately death. Over the course of 5 years, he lost the ability to move his arms and legs, speak, eat and even breathe without life-support systems. But, the disease has left his mind alert, and his creative spirit and drive to make art completely intact.

In the last year, Zach and his team have been developing tools and software in collaboration with TEMPT to help allow him to draw again using his eyes. See eyewriter.org for more info. Now, they’re going to make some art from the great drawings that he’s making.

This represents his return to being able to make a living as an artist.

In addition to the kickstarter, they’re also going to be dropping a 2.0 version of the device in the very near future. It’s a big improvement over the first design, which was really specific to TEMPT and his condition, and remains cheap (approx 100$ in parts), fully open source and has a high degree of accuracy. They were just out in LA testing it, and he told them that it’s completely comparable in accuracy to his 15k system.

TEMPT will be making artwork for digital prints, typefaces and screensavers, and in addition, they’re teaming up with my friends Chris Glass and Arianna Orland to make t-shirts, letter press prints. There’s alot of ways to get involved.

Let’s support TEMPT1 & EyeWriter. Go to kickstarter.com to get involved. 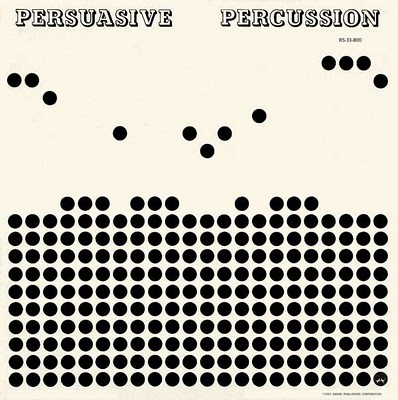 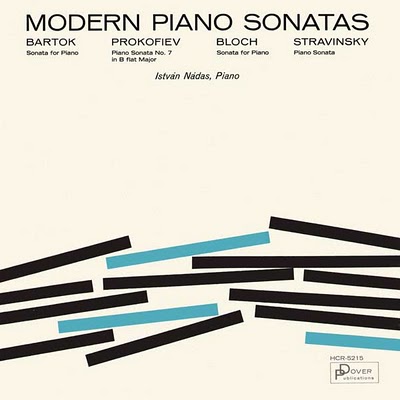 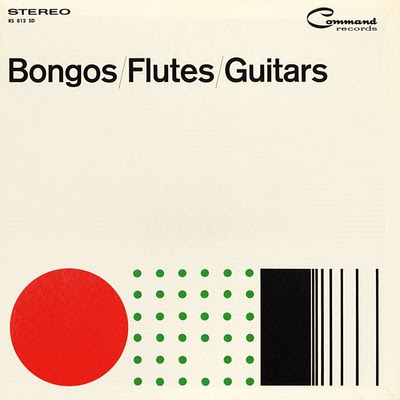 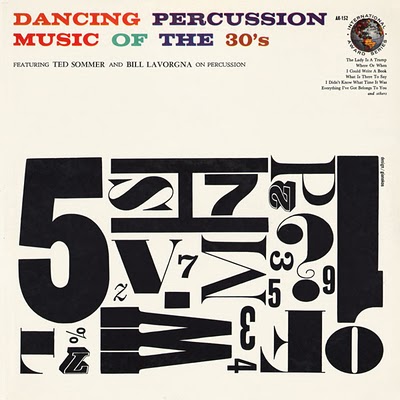 ProjectThirtyThree is a blog dedicated to vintage record jackets that convey their message with simple shapes. Fantastic! 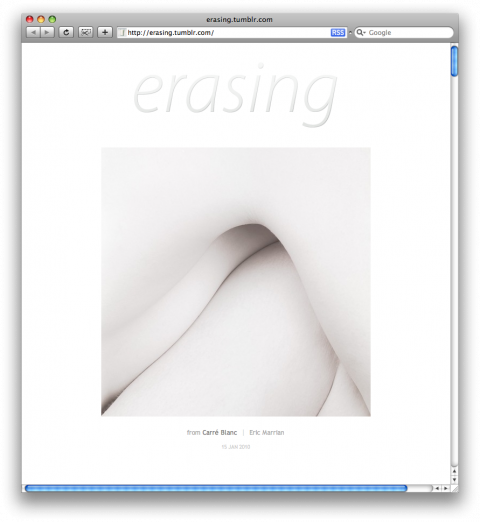 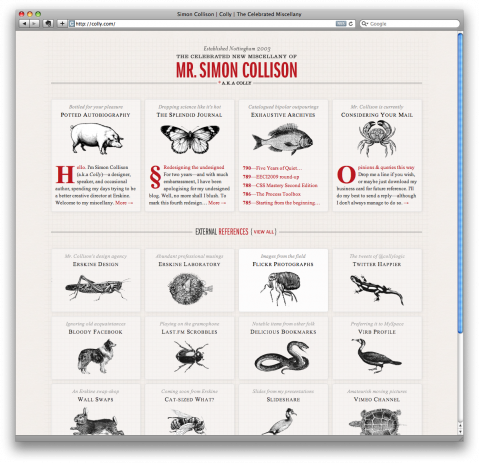 What a beauty of a site: Mr. Simon Collison 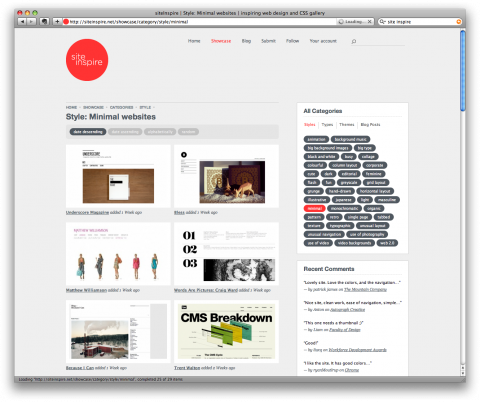 SiteInspire.net is one of these sites I wish I would have come across a long time ago. What an amazing resource of design inspiration. Browse 1,414 websites by style, theme, and type, or view a random selection. Hat tip off to kulör, a London-based digital design, strategy, and development agency. 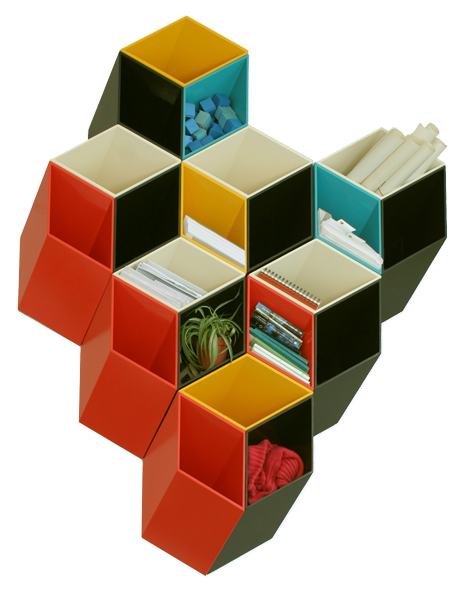 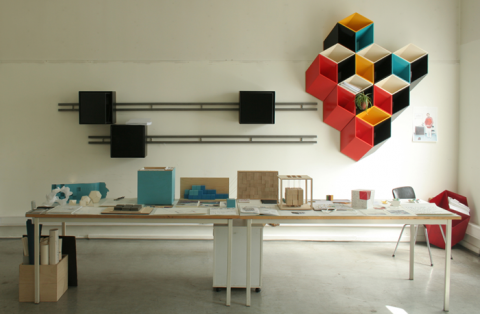 Wow, this unusual wall storage shelf-thingy called Imeüble made me look. Designed by Bjørn Jørund Blikstad, a newly educated furniture designer with a masters degree from 2009 from Oslo National Academy of the Arts.

Gasp for air — this is so amazing! As Sub-Studio explains the Dirt-Poster:

Designed by Roland Reiner Tiangco, Dirt Poster requires your participation to complete it. The back side of each poster is covered with a layer of ink, which you need to “paint” onto the front side the poster, to reveal the message that has been spot-varnished onto the paper. Awesome! The poster is limited edition and can be bought for $80.

The future belongs to the few of us still willing to get our hands dirty.

One of the craziest web interfaces/effects I have seen in a while, over on wonder-wall.com. Intruiging. 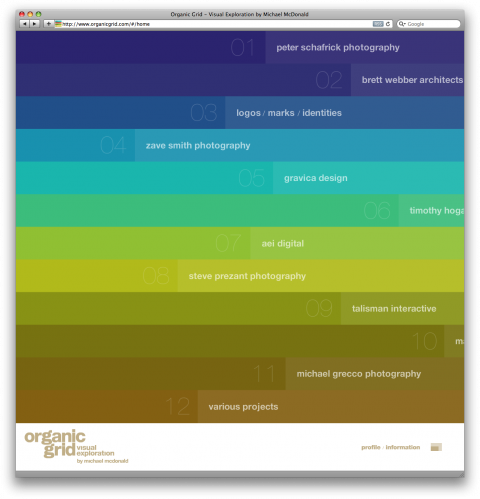 I am not big on flash sites but this Organiggrid.com site made me look.

Over 100,000 thumbtacks were used over 351 hours to create this typographic mural that spells out Fail Harder, a message that underlines the importance of failure during the creative process. Absolutely fantastic. I would love to do something similar in my studio! Hat tip! (Make sure to watch the video below!) 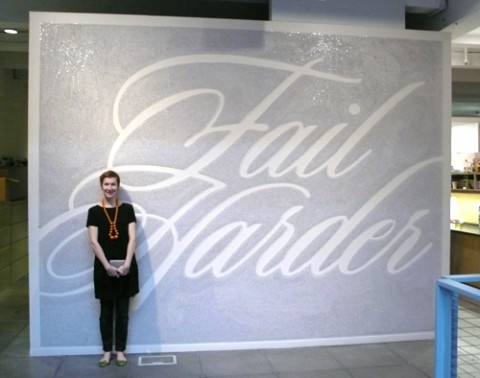 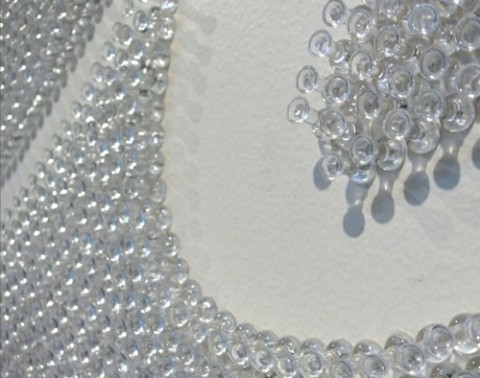 What is awesomeness? Awesomeness happens when thick — real, meaningful — value is created by people who love what they do, added to insanely great stuff, and multiplied by communities who are delighted and inspired because they are authentically better off. That’s a better kind of innovation, built for 21st century economics.

The Awesomeness Manifesto, by Umair Haque.

Dan Pink on the surprising science of motivation

Career analyst Dan Pink examines the puzzle of motivation, starting with a fact that social scientists know but most managers don’t: Traditional rewards aren’t always as effective as we think.

Big Belly Trash Compactors could make a huge impact in today’s garbage and recycling in big cities, like New York. The coolest part: It has a wireless notification system that will tell a control center when it needs to be picked up. Geeky stuff. Love it! 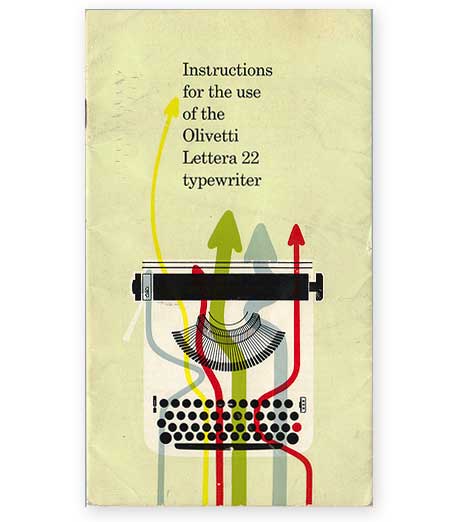 I agree with the crew over at Grain Edit, I’m also blown away by this Olivetti Lettera Manual. Absolutely stunning! You can see the full manual at Ed’s Flickr account.

let yourself feel. from Esteban Diácono on Vimeo.

Quite mesmerizing animation by Esteban Diácono and music by Olafur Arnalds. No?

The Heads of State (Jason is one of our former studio mates and we miss him dearly) just posted some new work to their site. My favorite is the hypothetical marijuana packaging for Print Magazine. Made me smile. 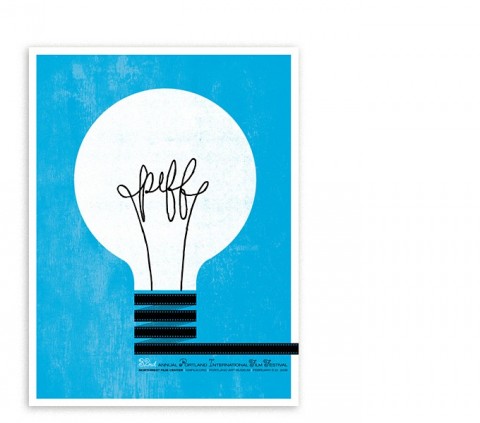 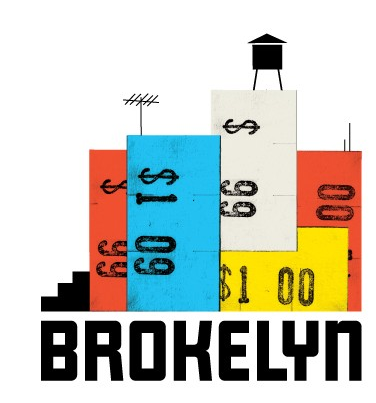 Identity for Brokelyn.com, a blog about living, eating, and shopping on the cheap in Brooklyn

iQ font – When driving becomes writing / Full making of from wireless on Vimeo.